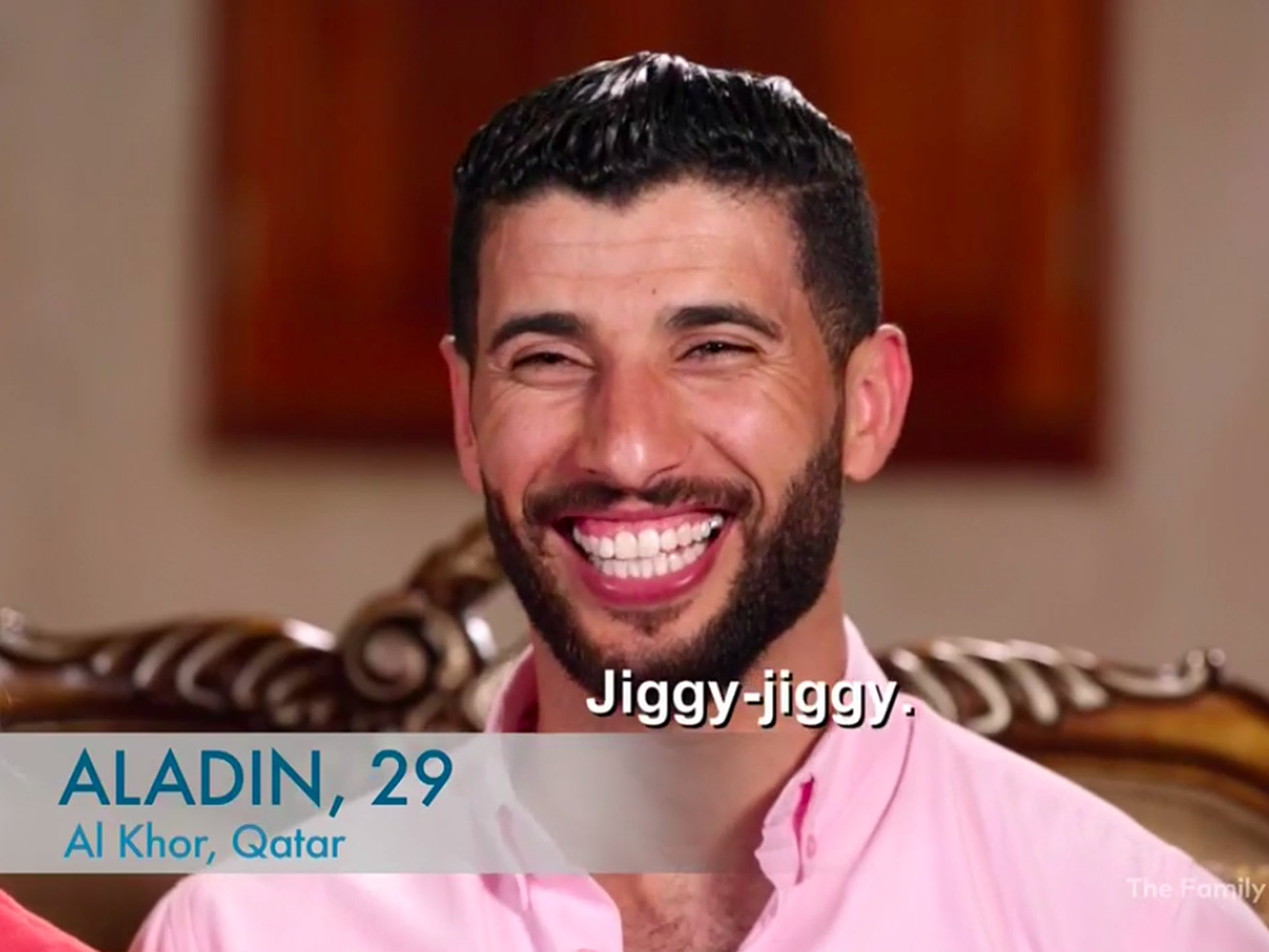 The biggest misogynist of them all. | TLC

Most dick is trash, unfortunately.

First of all, I want to thank you for your nice comments and emails. I’ve printed them out and pasted them into a special book next to my bed for when I’m sad.

Ok, I’m just gonna say it: this episode was boring. And, honestly, that happens sometimes. It’s the reality television circle of life. First, we’re introduced to them, then we’re annoyed by them, then they get boring, then they get overproduced, then they get their own spinoff shows that I refuse to watch.

There was one identifiable theme in this episode, though. These men are, for the most part, complete and utter trash. Misogynists are afoot, my friends.

Paul Is Not A Source Of Comfort

I had a Brazilian Lyft driver last week and he was super chatty with me. I fucking hate small talk in general and also I fear for my life when I’m alone in cars with strange men. He asked me if I knew what language was spoken in Brazil and I said Portuguese. I told him I knew that because of 90 Day Fiance and then he tried to talk to me about the show. I wanted to know about Tonatins, Karine’s hometown, and he did that thing where he let me speak but didn’t really listen to what I was said so that when he talked again, it was just more of what he’d been saying and had nothing to do with my question. That happens a lot in life. I didn’t have therapy this week, can you tell?

One thing I noticed about Paul and Karine is that there are way more subtitles for him than there are for her. She’s had like two classes and now she speaks better English than he does.

When they pronounce “Tonatins,” it sounds like they’re saying “tongue and cheeks.” Karine and her mother both don’t hide their dislike of him and neither does her father learning Paul’s a terrorist. If it were anyone else, you might be scared to have someone with such an extensive criminal record living in your home. But we all know that Paul is completely harmless. He’s the laughingstock of the tongue and cheeks.

He and Ronald are basically the same. Criminals.

Also, thank GOD Karine went home so her mom could help with the new baby. Women man up and take care of each other. Can you imagine being alone in Kentucky with Paul and a newborn? This random, remote Brazilian location is a better choice and the American Dream is a myth. #sorrynotsorry

When he finally realizes what it is, he’s enraged and embarrassed that she confronted him about this on TV. I swear, toxic masculinity is so fucking fragile.

Is it such a tragedy when a woman actually asks for what she wants? An emotionally healthy partner would listen to her, realize he’s not being personally attacked, and learn to give her what she needs. Laura, I am so fucking serious: if he lays a hand on you, you better tell us.

He makes her throw out the little purple puppy, which is just mean. Those things are so expensive! (I have an Adam & Eve discount code if anyone’s interested.)

Apparently, Aladdin blocks her on social media every time they have an argument. Guess what: that doesn’t work in real life! After being obsessed with a YouTube wedding that happened over the weekend, (#janaforever) I need to shout it from the rooftops: SOCIAL MEDIA IS NOT REAL!

Then Laura questions her decision to go to Qatar AGAIN and it’s like, yes, honey, go back to your loving son and strange adopted brother in Florida. I understand that sex is good and necessary, but this isn’t even real sex. This is two minutes of mediocrity halfway around the world.

Ronald is Taking Advantage of Tiffany

Again, we see a woman who stands by her decisions and ignores her self-doubt and intuition, but WHY? Just suck it up, stuff all your makeup in a sack, and put your kid on a plane back to Maryland to be with his actual family.

Tiffany’s whole storyline on this episode is kinda sad. I’m bummed that her mom isn’t there on her wedding day, that Ronald has to go pick her dad up from the casino, that her son hates Africa.

Ronald has the same feelings about Daniel that I have about my cat, Snacks: he’s the best boy in the world.

At a family barbecue, suddenly we hear a loud shrieking, as though someone’s in tremendous physical pain. Then we learn that Daniel’s aunt has arrived from the States and he’s just VERY excited. This enthusiasm is alarming, as it shows the depth of how much he misses his home… Also, Tiffany, why you didn’t meet her at the airport? What is WITH people on this show?

Tiffany encourages her sister to call Ronald “brother.” But, like, that’s grammatically awkward. No one addresses anyone using the word “brother” unless they’re Hulk Hogan.

Laura (I think) asks Ronald questions about his past and he talks over her. Men. Again! Men! Despite the disrespect, Laura gives the family’s blessing for their marriage through tears. And, I’ll tell ya what: those do NOT look like tears of joy. They look like fear tears. I can smell ‘em a mile away.

Also, did anyone notice the shirt Ronald is wearing? Man of valour? What is that? Sounds like a white supremacist group or some veterans who also have a moving company.

So then, on the wedding day, Tiffany’s dad is staying in a casino hotel and Ronald HAS to pick him up because no one else can for some reason? I don’t know. I just googled it and Uber exists in South Africa so this is annoying.

I know I’m hard on Ronald but it’s just because he deserves it. As a person in recovery, I can tell you that it’s possible to walk into a bar without picking up a drink, as long as I’m working a program and I have a legitimate reason for being there. I can’t tell if Ronald has either.

(Also, listen to my podcast, ScamWow, the podcast about scams. Last week we did an episode about gambling, so this is relevant.)

Corey’s voice cracks like the little baby he is. He’s whining about re-opening their bar, but that place is probably a cash cow because there’s literally nothing else for miles. Evelin tells him they need to spend like $4-5K on tables and chairs, which sounds super inflated to me because you can get four for $100 on Wayfair and they’re nice, so like, what’s she buying? A fucking Eames?

Evelin doesn’t want to get married or have kids, Corey. GET OVER IT. That’s not her dream and it’s totally okay. It’s feminism. She wants to be a childless woman and she may not change her mind and you just need to accept that instead of expecting her to change. Not all women were born to be baby vessels. Some of us just aren’t interested.

Ok, you guys, I haven’t been able to pinpoint it until now, but I just figured out who she sounds like. This is going to be a very deep cut, but her voice reminds me of David Bowie playing Andy Warhol in Basquiat. (One of my favorite movies of all time.) Watch this clip if you don’t believe me. “I don’t know…” Can’t you just picture Jenny saying that? “Come on, Bruno. You’re rich…”

I think my hypothesis from last week, that Sumit is a little Richie Rich, is definitely accurate. He’s going back to visit his parents and it’s unclear whether it’s for life or just the afternoon. This feels produced because it’s overly dramatic. The way he’s telling her he has to leave reveals that the producers are desperate for a storyline. Reality TV stars can’t act.

Sumit speeds away in a tuk-tuk and leaves Jenny picking her feet. Jenny doesn’t want to be left alone in India, which I can kind of understand. That might be weird. There’s Uber in Mumbai, but what about Postmates? That’s all you need. And La Croix. I hate Postmates though. Uber, too.

I don’t have anything more to say about this couple because they’re honestly very in love and there isn’t a lot of dramatic tension in their storyline and that’s great. Not for the TV show, but great for my heart.

A new season of Before the 90 Days premieres this Sunday and I’m not sure what to do! This cast is starting to bore me, so maybe I’ll see what those guys have going on.

I guess we’re getting a new episode of The Other Way next week, too. Jeez, how many did TLC buy? Remember my American Apparel analogy, you guys? Don’t expand the brand too quickly or people will get sick of gold lame leggings.

Anyway, I have cramps and I’m going to bed. Love you. Byeeee!